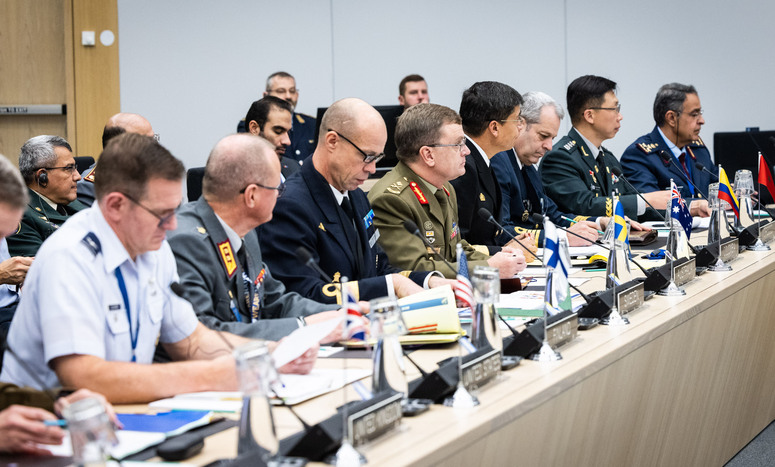 Opening the session, the Deputy Chair of the NATO Military Committee, Lieutenant General Lance Landrum extended a warm welcome to the Partner Military Representatives and officials attending in-person and online. He highlighted that “because of its global dimension, Maritime Security is key to NATO and its Partners peace and security. They depend on each other to ensure coherent, coordinated and lasting solutions to existing maritime challenges”. Before passing the floor, Lieutenant General Landrum also noted the value of such thematic meetings, especially as a platform for strategic discussions and information exchange between NATO and Partners.

NATO Allied and Partner Representatives then received briefings from Australia, Sweden and the NATO Allied Maritime Command (MARCOM). In his briefing, MARCOM Commander, Vice-Admiral Keith Blount updated participants on NATO’s ongoing maritime activities, including operations, exercises and trainings as well as opportunities available to Partners for maritime cooperation. “The maritime domain encompasses oceans and seas, on, above and below the surface, in all directions. It is a vast endeavor to ensure credible deterrence and defense across the Alliance’s entire maritime territory and the land area it influences. The reinforcement of coordination and cooperation with Partners is essential to supporting NATO’s efforts in the maritime domain”, he added.

At the Madrid Summit, NATO Allies reiterated the importance of reinforcing NATO’s Maritime Posture as an integral and crosscutting part of the implementation of the Alliance’s deterrence and defense posture. “Alongside its Standing Naval Forces, NATO is reinforcing its maritime posture and taking concrete steps to improve the Alliance’s overall maritime situational awareness, deter and defend against all threats in the maritime domain, uphold freedom of navigation, secure maritime routes and protect its main lines of communication”, underlined Vice-Admiral Blount.

Through maritime and joint exercises, NATO Allies and Partners are working on maintaining and developing warfighting competencies, building interoperability between NATO and Partners forces as well as improving their overall combined maritime skills and readiness for all operations, international and national. “Last month, Australia contributed a maritime patrol aircraft to NATO’s Sea Guardian mission to provide maritime situational awareness. Earlier this month, NATO ships were holding maneuvers in the Atlantic and the Mediterranean Sea, bringing together five aircraft carriers, numerous warships and thousands of sailors. So Allied and Partner maritime forces are clearly demonstrating NATO’s ability and resolve to achieve its strategic objectives in vastly different contexts”, noted Lieutenant General Landrum.