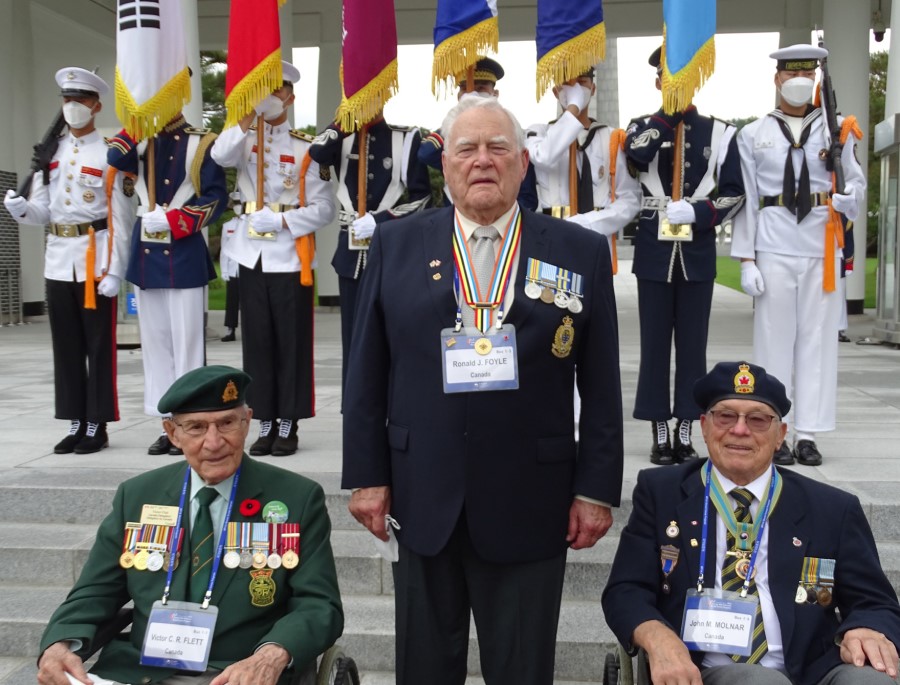 Victor Flett did not think he would be returning to Korea almost 70 years later – this time for an award from the Korean government.

“This revisit was very meaningful to me,” said Flett, 94. “I have so many friends that are veterans of the (Korean) War who could not be here, and so many of my family members were in the military.”

The Republic of South Korea honored Flett and two other Korean War veterans from BC for their service during and following the Korean War. South Korean President Yoon Seok-youl personally presented the Korean War Service Medal to John Molnar of Abbottsford. Flett and Ronald Foyle of Vancouver received their medals previously.

“The freedom, peace and prosperity that the Republic of (South) Korea enjoys today were built on the foundations of the blood, sweat, sacrifice and dedication of our veterans and those veterans (who served) under the UN flag,” said Mr. Yoon.

The men were among 200 Korean War veterans from nine nations selected by South Korea’s Ministry of Patriots and Veterans Affairs to participate in the Veterans Revisit Program.

Flett served as a sonarman aboard one of eight destroyers deployed to Korea, Her Majesty’s Canadian Ship Crusader, dispatched from Esquimalt, B.C., in July 1953. Since Crusader arrived in Korea just days after the July 27 armistice, Mr. Flett took part in UN peacekeeping operations instead.

Born in St. Peters, Man., in September 1928, Mr. Flett is the last of three generations from Manitoba’s Peguis tribe to serve in Canada’s military. His grandfather, Private David William Stranger, an infantryman in the Canadian Army, was killed during the First World War in the Battle of Vimy Ridge.

Mr. Flett, who served in the Royal Canadian Navy for 33 years, said the recent visit was his fourth trip to South Korea since the war ended, and his love and admiration for the nation and its people continue to grow each time.

The veterans attended a national ceremony at Jangchun Arena that marked the 72nd anniversary of the start of the Korean War.

The veterans also visited the Korean War Memorial. According to The Korean War Veteran newsletter, the veterans were greeted at the site by Korean children who gave them hugs and wanted to take their pictures with them.