HMCS Vancouver Searches for Vessels of Interest off Korea 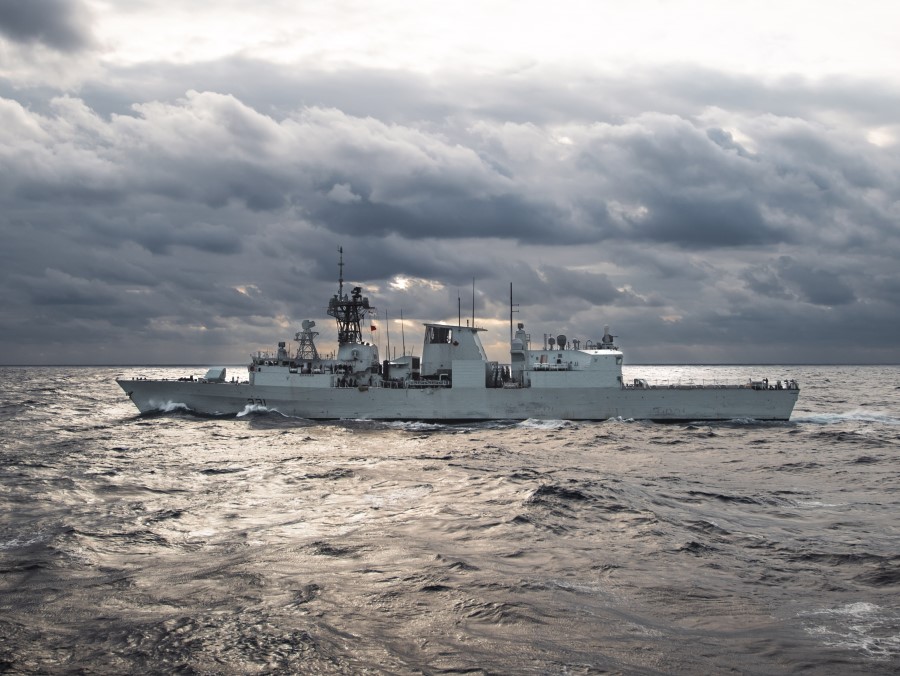 HMCS Vancouver’s recent 31 days on Operation Neon were busy. The ship was part of a multinational effort to search for vessels trying to evade United Nations Security Council sanctions against North Korea in the East China and Yellow Seas.

With its aircrew, operations and bridge team tracking thousands of potential vessels of interest, it was like searching for a needle in a haystack. That’s where Canuck, Vancouver’s CH-148 Cyclone helicopter, came in.

“On one busy day we picked up over 1,000 different contacts,” said Captain (Capt) Tyler Molloy, an Air Combat Systems Officer in Vancouver. “When we wanted to examine a ship, it meant we had to fly low over the water with the helicopter’s door open, camera in hand, looking for any evidence of suspicious or illegal activity.”

Primarily a surveillance operation, allied ships and aircraft patrol for vessels of interest that are known to try to evade the maritime sanctions. The evidence collected is used to build a “pattern of life” in the East China and Yellow Seas. The information makes its way to the United Nations, where it is analyzed for cases of non-compliance.

“The sheer number of vessels in the East China Sea meant that we had to adapt our tactics,” said Capt Molloy. “As an aircraft, we are able to range quite far from the ship and cover a lot of ground quickly, but this means prioritizing our time and energy to make the most of each flight.”

Canuck provides Vancouver with the invaluable capability of reaching out much further than the ship’s sensors and radars can cover on their own.

While Vancouver’s helicopter served as the ship’s eyes in the sky, crew members in the Operations Room searched the waters closer to the ship.

For Sailor 1st Class (S1) Seamus Bowkett, a Naval Combat Information Operator, this meant giving information to the ops team to build and maintain a complete picture, above, on and below the water. This information was used to locate and analyze contacts closer to the ship.

“During Op Neon we performed a much more focused task – attempting to locate and gather information on specific vessels of interest, their network and pattern of life,” S1 Bowkett explains. “There is difficulty operating in such a dense coastal environment. We used our team to the fullest during every watch.”

While Canuck tracked vessels from the sky and the operations team handled their identification, the bridge team had the difficult task of sorting through what they were seeing as they navigated the warship through some of the busiest commercial shipping lanes in the world. They expertly operated around hordes of civilian fishing vessels, while attempting to collect information to help build that picture of the pattern of life.

For Sub-Lieutenant (SLt) Henry Wong, a Bridge Watch Keeper under training, it was a learning environment unlike any other.

“I was part of the team identifying vessels. We had a lot of tools at our disposal, but it was definitely more challenging serving in this role during Op Neon. More is demanded from you to support the team. The tempo felt much higher throughout the ship,” he said. “After Op Neon I have a better understanding of good seamanship.”

Despite the increased stressors placed on the team during Neon, SLT Wong enjoyed the experience and says his interactions with foreign vessels were all courteous, regardless of the rising geo-political tensions in the area.

“Travelling through the East China Sea and seeing all the fishing vessels and floats at night made the open ocean look like a city skyline at times,” he describes.

“It kept us busy during our watches, ensuring we kept our ship safe, but also ensuring we weren’t intruding on the work of fishing vessels. All of our interactions were safe and respectful – it felt very Canadian.”

Vancouver is currently deployed on Operation Projection for six months, conducting forward naval presence operations in the Indo-Pacific and participating in international exercises with partner nations. The ship is expected to return to Esquimalt December 5th.