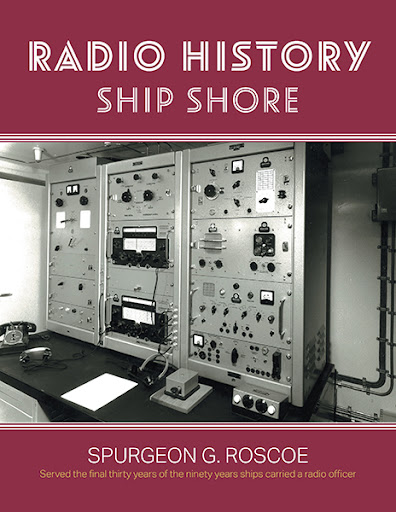 From flags and pennants to Morse code and complex telecommunications, Radio History Ship to Shore is a treatise on the navigational aids vessels have used over the centuries. Author Spurgeon “Spud” G. Roscoe takes the reader on a journey through the evolution of communication systems globally, from the days of Columbus to modern times.

Roscoe also mines his first-hand experience as a radio officer who sailed on a dozen ships, including a reproduction of the ill-fated HMS Bounty. Now in his eighties, he has been meticulously collecting the content for Radio History Ship to Shore for more than five decades. The result is a hefty tome in which Roscoe shares his encyclopedic knowledge and unyielding fascination with communications systems. The book includes all the vessels in the RCMP marine section (and, later, marine division), the RCAF marine squadrons, the Royal Canadian Navy, the Canadian Government Merchant Marine, and the Canadian Coast Guard, including the weather ships, and icebreakers.

Radio History Ship to Shore is complemented by a wealth of historic photos of everything from warships to Canada’s famous Bluenose schooner.

Spurgeon G. Roscoe has been fascinated with living the life of a radio operator since the age of seventeen. In fact, he became so enthralled with his work, one year he was at home for only six weeks. Although he officially retired years ago, Roscoe’s interest in the navigational aids and communications systems used by ships has never waned. He belongs to a number of organizations, including the Halifax Amateur Radio Club, American Radio Relay League, Radio Amateurs of Canada, The Nova Scotia Lighthouse Preservation Society, and the California Historical Radio Society.